Q & A with Eric Stevens

Eric Stevens is a young footballer from California who has been seeking trials with professional clubs.  He was a striker with Fontana International Soccer Club at United Premier Soccer League.

Eric Stevens an Up and Coming US Soccer Striker to watch! 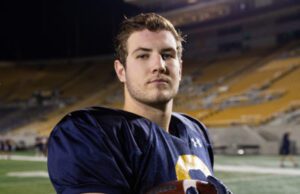 Eric lives in California, and is actively seeking trials with professional clubs.

You can learn more about Eric at his LinkedIn profile.

How old were you when you began to play soccer?

I was 3 years old when I was introduced to the game of soccer.  I can remember the very first team I was on!  An American Youth Soccer Organization (AYSO) team called the Rugrats.  I thought the team banner would be of the nickelodeon characers of the actual Rugrats, but it was literally a rat on a rug.

Did you grow up playing in the US?  If so, at what level did you play?

I did grow up playing in the US.  During my early youth soccer career, I played in the AYSO.  It was just the typical league any parent could sign their child up for.  But once AYSO became a little too easy for me, I started to play a higher level of play.  I have played other positions, but primarily striker.

Did you play striker in high school?

We were undefeated that varsity season and clinched the Sierra League.  I was recognized at the end of the year as one of the 2nd team-all-league Sierra League’ players of the season.  This was a huge deal for me at the time.

Since then, as I have developed into a much stronger player, I no longer hold on to the accolades.  I appreciate them, but now I’m all about what type of player I am today and not what I did four years ago.

Did you play striker in college?  If yes, how were you recruitted?

I did play some college soccer at Fresno State for 2 years (2014 – 2016), but it was for Fresno State’s Men’s Soccer Club.  Unfortunately, Fresno State does not have a Men’s NCAA soccer program.

Games were still competitive against other college club teams, but I never got the actual NCAA experience.  Fresno State’s Men’s NCAA soccer program was one of the best in the nation at one point before the program was cut.  I was recruited onto the Fresno State Men’s Soccer club a few days after I attended the club’s 2014 fall tryout.

You have decided to take a break from college in order to pursue your dream of playing professionally.  What made you decide to do this as opposed to completing your degree first?

This is a very good question I have to say.  There were many reasons that lead up to the point of me deciding to take a break from college.

I wasn’t at a school that had a NCAA soccer program.  (A large part of the reason I selected Fresno State was because my Dad had gone there also.  I also ran track and wasn’t certain I wanted to focus exclusively on soccer)

But after my 2nd year at Fresno State, I realized I was getting older and that if I wanted to play professionally, I couldn’t continue doing what my older friends were doing.  I wanted to pursue a professional career, preferably as a striker.

I’m not trying to say that they made poor choices.  Just for me, I didn’t want to continue playing club soccer knowing it wouldn’t lead me anywhere.  I wasn’t interested in just drinking and partying on the weekends.

Almost all of my friends knew I wanted to be a pro soccer player but I feel like my friends doubted the chance of my accomplishing that.

After considering all of that, I decided that the best choice for me was not to go back to school but to start chasing what I really want in my life.

Have you considered trying out for a team outside of the US?

I have considered it.  I just don’t know exactly how tryouts work in other countries so that is why I haven’t been able to do something like that.  If it was as easy to just fly to Germany and join one of the professional team’s academies, I would do it in a heartbeat.

Do you have an agent?  If so, how did you choose him?

I sadly do not have an agent.  I wish I had an agent because I think it would make things easier; I would be able to get an opportunity somewhere in the professional world of soccer/football.  There has to be one professional team in the world that could use a striker like me.

You’ve had some tryouts with some well-known teams. do you think it is easier to get a tryout if you train abroad?

I believe so.  The way I imagined my dream would be is to be playing abroad maybe in Europe.  I know I am a really good player, but I also work 2 jobs and it’s tough.  There are days I don’t feel like training but I push myself to still train on those days.  The way I look at it is if other guys are working too and come home and relax then I need to be a step ahead every time and train after I come home from work feeling tired.

In my opinion, training abroad would be easier where I didn’t have to worry about working different jobs and still trying to train.  If I focused strictly on my training every day I would surprise a lot of teams in the football world.

Can you tell me a little about the USPL?  How did you join them?

Yeah!  The UPSL stands for the United Premier Soccer League.  To make it sound easy, it is the 3rd division of the MLS right now.  Above the UPSL is the USL which is then considered “professional” which is like the LA Galaxy II and all the 2nd team players of their MLS teams.  But believe it or not, I didn’t even know about this league until one of my co-workers at Dick’s sporting goods told me to come and try out.

My co-worker had never seen me play before but he saw from some of my social media that I was out working hard almost every day.  He thought I may have a chance to get on a team.  I followed his advice and since July of 2017, I have been playing on Fontana International.

Do you have any advice for young players who hope to play professionally?

My advice for young players that hope to play professionally one day is that some people in this world are going to have easier routes than others and that’s just the way things are.  You cannot control certain things like that.  The system for young soccer players here in the US is slowing catching up where players like myself won’t have to worry if they are on “the right path.”

Believe me, I have been asking that myself for years.  My brother and Dad have been telling me that I have just been “spinning my tires but haven’t been getting any traction.|  That has certainly been tough to hear.  All they mean is that I have been busting really hard with everything I’ve got the past couple years but unfortunately nobody is seeing it.  They want me to play in the college system but I feel like as a 22 year old, I am ready to challenge myself in a professional organization.

I believe hard work eventually gets noticed.  That goes for me and other young athletes.  For those young athletes that want to play professionally one day all I have to sya is that hard work doesn’t stop.

You have to be willing to work harder than anybody else and believe in yourself.  You may feel you are better than players who have had it easier or who get selected over you, but if you call it quits, it just won’t ever happen.

Get out there in the hot day and do what nobody else is doing  Don’t be a cookie cutter athlete.

What Eric Stevens is looking for:

Lastly, the final thing I want to share is that I’m not driven by money.  That doesn’t matter to me.  I’m driven more and more each time I am knocked down.

My ultimate goal as a footballer is to earn my spot on the U.S. Men’s National Team in hopes to helping the team for the future World Cups after Russia 2018.  I just need some help.

Everybody needs help at some point in their lie.  I’m just asking for the right group of people to take a chance on me.  I won’t let you down.